The new version is here! Many small changes have been made, I also didn’t want to make any huge change that would make the game feel different.

For anyone who played miniDoom before, I’m sorry to say there is no new levels or additional content 🙁

So the changes for this new patch follow 2 principles to hopefully make the game more fun and not lose its essence:

2- Players should never get stuck

For the first most weapons got a damage or attack speed buff. Also some enemies might have had their HP reduced. For the second all levels have received many small changes like additional platforms in frustrating sections, better tutorials and more signs and items pointing the way. Also cruel enemy placement reduced in easier difficulties.

The player can now shift the camera up or down, by standing still and crouching or aiming up. Camera returns to normal when moving. The time for the camera to start moving is short, and it starts moving slowly. I hope I landed it right and it never gets in the way of the player. 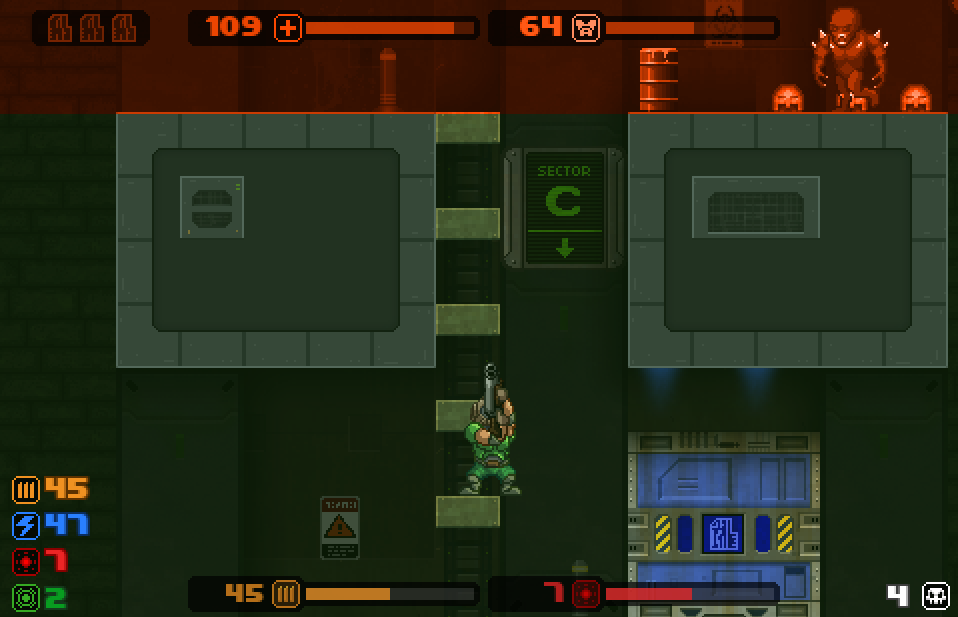 in orange: Area you couldn’t see before

-Rocket Launcher and grenades now use “Explosives” instead of just “Rockets”. This should clear the confusion of what ammo grenades use.

New sprites for the powerups, weapons and GUI !!!

Shotguns can deliver a lot of damage, but you have to land a good shot. I found out that many players had trouble doing that, sometimes because of the random nature of the bullet-spread. So I made the shotgun a lot more forgiving by increasing the amount of bullets and range. Landing a good shot should be way easier and landing a perfect shot will be very rewarding.

-Damage from projectile moved to first frames of explosion. The projectile itself does little damage now. Enemies in direct contact with the explosion as it detonates will take damage as if being hit by the rocket.

-Frag shrapnel will not disappear when outside the camera.

-Frag Grenade damage reduced for shrapnel and increased for explosion and projectile (Damage slightly higher than before). This should give frag grenade damage more consistency.

-Damage increased for both plasma rifles.

-Deals 1.5 damage to shields (summoner and armored pinky). Many people selected this weapon to deal with Summoners so It seemed a good idea to make it a powerful option against shields.

-Added some background screens depicting its usage. I hope this will make it clear that the weapon is essentially a flame thrower.

Damage changed to have a big burst of damage as cube deploys, then steadily reduces damage for duration (total damage is slightly higher before). This will make cube more effective against mobile enemies.

Every new patch the BFG gets buffed! So let’s keep doing it:

-Damage from the projectile moved to inner zone of damage. The projectile itself now does negligible damage, all enemies really close to it will take much higher damage than before (like being directly hit).

-Distance for all damage zones increased.

-Amount of hazmat suits in levels increased. (Or placement improved)

I found that many players started playing by default in “Ultra-Violence” since it’s what they play in Doom. I lowered the difficulty of “ultra-violence” to make it more similar to “bring it on” which is also easier now.

-Bring it on! (normal) amount of enemies reduced on most levels. Added aid platforms in some really hard platform sections.

-Higher difficulties remain as insane as ever! 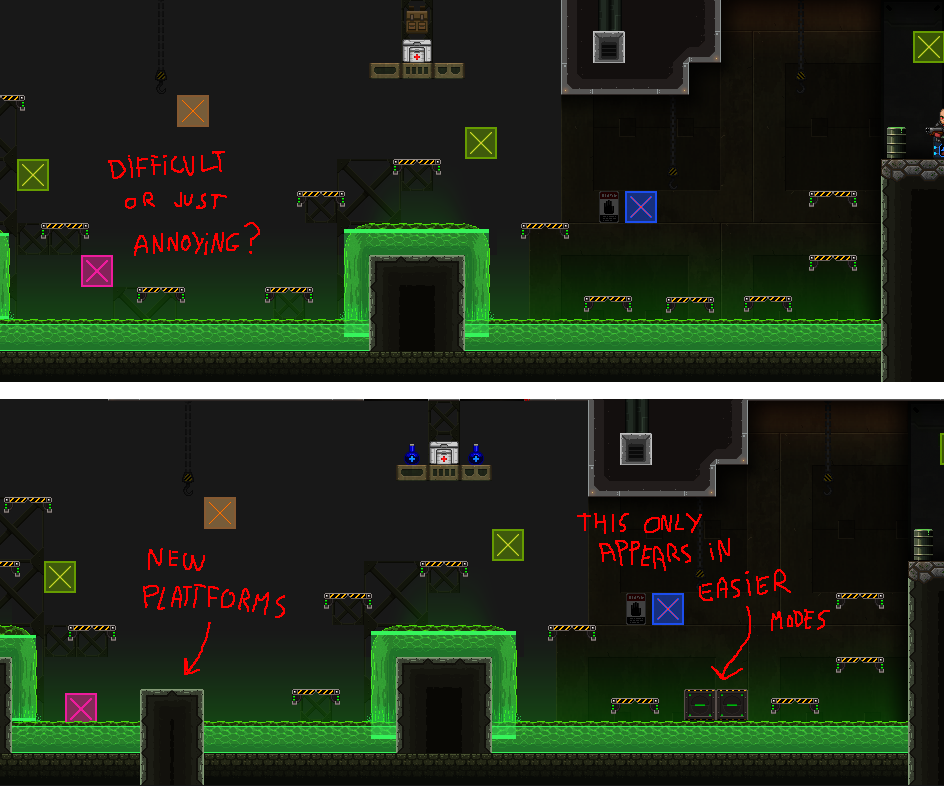 Example of terrain modification in the toxin refinery.

-HP will not increase before Nightmare difficulty

-Blind jumps reduced by adding ledges, also camera moving should help with this.

-Added camera blockers to improve visibility during some fights

-Reduced the amount of “red vines” in levels with red vines

The in-game rocket jump tutorial you all deserved

-Changed places that where annoyingly difficult. Such as places with too many death pits, or sections with too many falling platforms and no solid ground. Seeing people play these sections made me think that this difficult terrain was just not fun to play through.  So many levels that had this kind of enemy or hazard placements have been changed to be more straightforward and less frustrating. 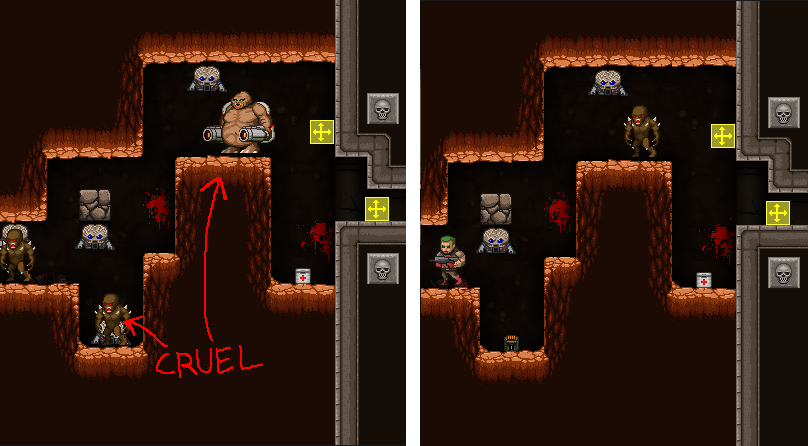 The mancubus blocking the path was not even dangerous, just tedious. Also this was supposed to be a secret section. It should be rewarding.

-All secret doors received a new graphic which makes them MUCH easier to find (Many players never realized secret doors where a thing). Also tweaked background graphics to make them more obvious.

-Placement of some secrets changed, spread more evenly through the level

-Tutorial for secrets improved (I hope)

-Removed possibility to obtain the gauss cannon early. It was not good for properly learning the use of this weapon

-Now have to activate hell portal manually before ending the level

-Added plenty of ledges in places with many pits

Boxes will now shake when hit to demonstrate they receive damage

Some bugs fixed, among the most notable: