Back when I was first making MiniDoom I was planning on putting up a flinch mechanic like in many other platform games.

First on my mind was super Metroid, enemies knock you back there, so why not here? As I continued continued with the development the game took form on what it is now (something very different from super Metroid). You have plenty of health and enemies hit you a lot, you have a short invulnerability period to even the odds against many enemies. Its fast, it’s cool enough.

Adding a flinch I thought would slow down the combat too much; I thought that it would be suitable for a game where you get hit less, not this one.

This was a mistake however, now you can easily go through enemies without even fighting them, it’s no problem since you have so much health. In the classic Doom enemies block you and you have to defeat them or find yourself trapped.

Well I’ve reached a compromise. Some attacks will knock the player back, and some more than others.

A regular shot will just trigger your invulnerability frames, but running into an enemy will knock you back, explosions too. This might have some other cool applications (rocket jumping???)

So MiniDoom is getting  this new necessary evil, the dreaded flinch mechanic. But don’t despair, the marine will get some new movement options to fend off the hordes of hell.

See you next time. 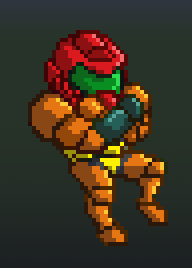