Skip to content
UPDATE!!
The game is already out!, please go to our DOWNLOAD PAGE to see all the new info and download the game for free!

I’ve been changing the game quite a bit since its release; trying to improve on its many flaws. MiniDoom was a project that was made in just a few weeks. We had to rush to release it, because we wanted to launch it alongside Doom 4 (Doom 2016). So the game was not tested enough, and is very barebones compared to what we had in mind.

I’m happy to see that MiniDoom has picked up some notoriety lately. So I’m gathering all these improvements and instead of just adding them to the old game or releasing a pack, we are making it a whole new standalone game, the way it was meant to be played from the beginning.

So we are giving this little project a final boost: MiniDOOM 2!!

Of course it will be a completely new game with new levels and a new boss.

A new overworld map will allow you to select levels and revisit completed areas.

Since the game will be longer, it will save your data.

What is a new game without new weapons? Each weapon will now have a counterpart for a total of 12 guns!

There will be a much wider variety of enemies to test your new guns on!

Not only the previously shown grenades but other new moves, powerups and mechanics too!

I believe this will be a better way to play the game.

What NOT to expect:

No mobile version – Sorry guys. I’m trying to export a Mac version though!

No multiplayer – It doesn’t seem viable for a small project like this one.

The original MiniDOOM was based on DOOM 1. This one will not be limited to any Doom version in specific. We decided to just have fun with it so it will mix elements from all the Doom games!

You will be able to fight classical Arch-Viles alongside with new Hell Knights. 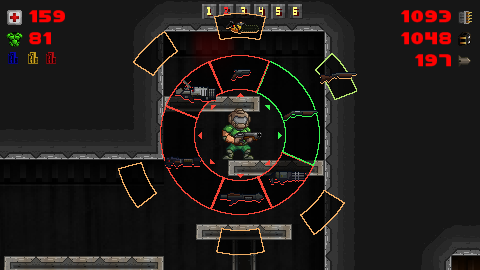 To deal with the new amount of weapons a quick select mechanic is already added. Like the one in Doom4. (also a peek to 2 of the new weapons)

These and many, many more features will come to MiniDoom 2!

The release date for now looks to be late november 2016. Will keep on posting till then.