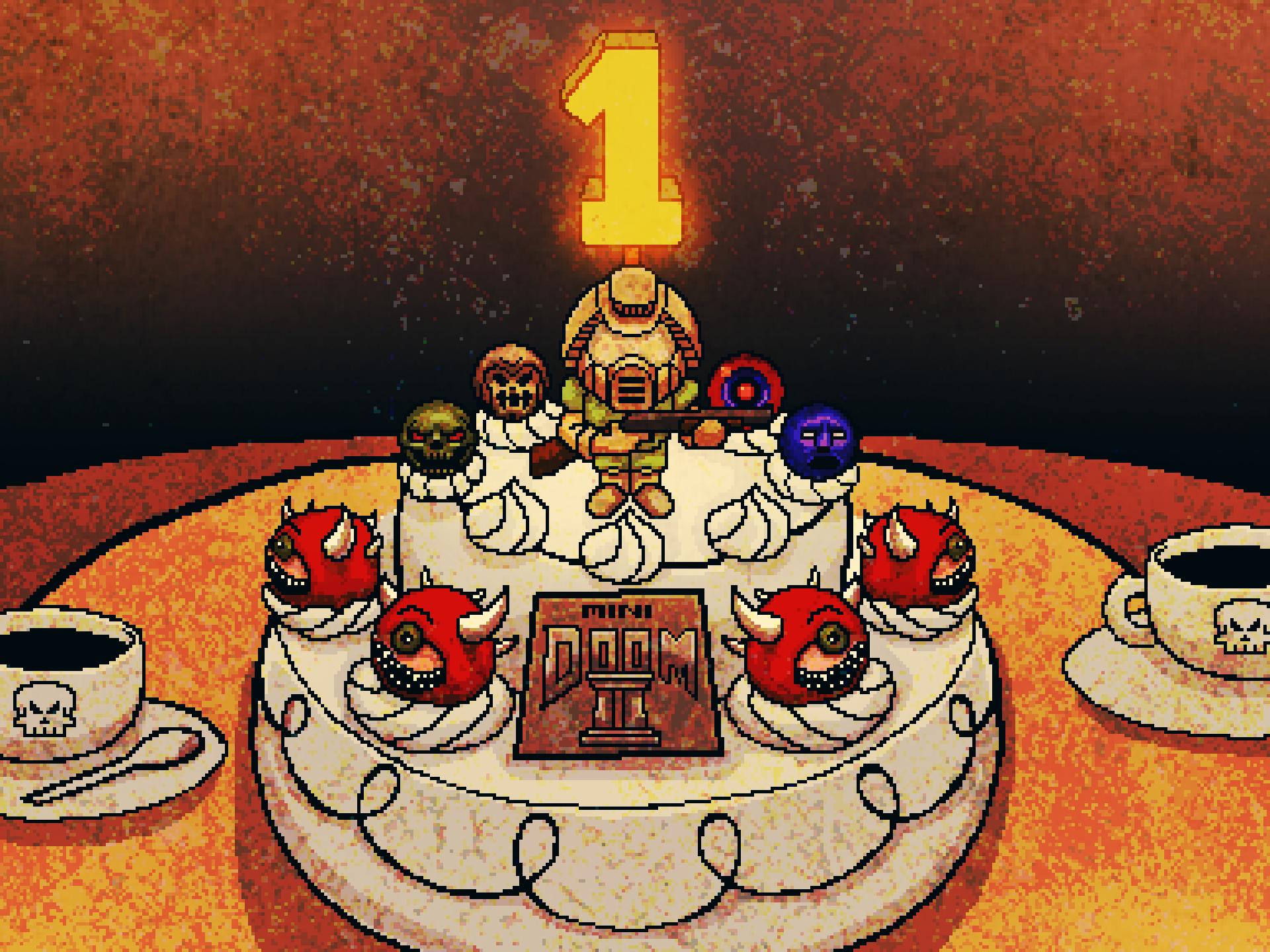 So it’s been a year since miniDoom2 came out. And how’s the game? Well… it’s a flawed thing. It’s a product that overgrew its purpose and became its own thing. A 15 minute demo that became a 6 hour long game. A mish-mash of different mechanics with a cero-budget plan. But it had enough soul to be born regardless.

It was also probably the best game design learning experience ever.

Running the game after a long time and seeing the copyright disclaimer and menu screen on my PC… running and shooting through a couple of levels and hearing the music… I can’t stop myself from really liking it. And many people like it a lot too… miniDoom2 has something that’s really catchy and endearing. Perhaps it’s the well-known enemies, sounds and guns that almost feel like old friends. Or maybe it’s the utterly ridiculous premise that somehow also makes perfect sense. Who knows, but if I have to describe miniDoom2 nowadays I’d say it’s: A lovable mess. 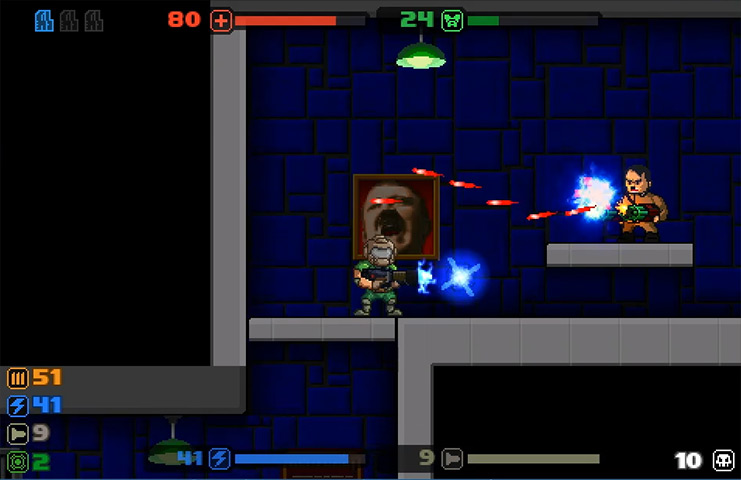 This makes sense, shut up!

I won’t be talking about the new patch in this post. I’ll explain everything when it comes out, which will be in exactly 2 days, I hope. But the main goal of the patch is to make the game more fun and not change its essence. Also the patch does not contain new levels.

So let’s talk a bit about miniDoom2 one year later…

Greater than the sum of its parts

miniDoom2 was mainly made by 3 dudes (other dudes where involved too). Me (Felipe) a noob game designer, a reluctant graphic designer and a terrible programmer. The artist (JC) who was a total novice in pixel art when starting the game. The musician (Manuel) who had just finished a course on music for games and wanted try his new skills (he’s still probably the most experienced one in what he does).

We’re not what you would call a dream team.

I do think that a creation is usually greater than its creator, since it’s just the best parts. And in this case the team also elevated the whole project; I could have never made such a game as this without them and vice versa. Each one of us was passionate about a certain aspect of the game, we pushed each other to meet the enthusiasm of the team and the existing DOOM fans… that is something you can never achieve working on your own.

And somehow it worked out. Truly the game turned out greater than the sum of its small parts.

Who else got this reference??

So what have we been up to the last year? Well life REALLY got in the way. I can say that all the team had a lot in their plate after launching the game. We all moved into new places (some of us multiple times), also getting  KNEE DEEP IN DEBT (haha), one of us got married, and various other miscellaneous shit.

There was also a big BURNOUT after the game came out… the final weeks of the game we crunched really hard (even after postponing the deadline multiple times). I can only speak for myself but, at the time I was recently unemployed so working on the game felt like my job. And damn I put some insane hours into it. Final weeks putting on the textures in the maps and finishing up the levels easily consumed 10 hours each day. 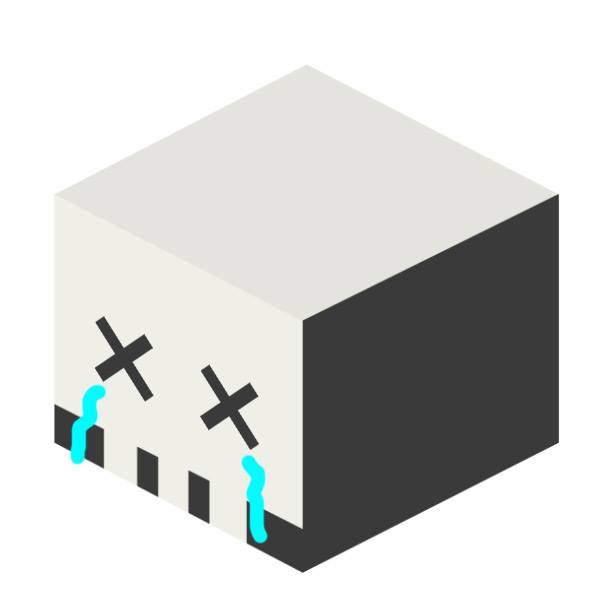 We all took a break. And I can happily say that we are all in stable spots now 12 months later and finally looking forward to the future (yeah I have a pretty decent job now so chill). No concrete projects for the foreseeable future, we are all doing our things, for now at least.

Let’s get real miniDoom would have been nothing if not for the DOOM and videogame development community. I mean it’s the only reason why we got hipped for doing a sequel in the first place!

The production of the game somehow got plenty of people interested, and the launch of the game also sparked many creators, gamers, developers, streamers, etc. to reach out and share, review or just play the game. And trust me that I watched 99% of the gameplay videos and comments. I just don’t respond all the time cause I’m just a common ape.

A great man made an epic tiny physical version to hold the game. It has a 3D printed USB drive holder for the game and a custom-made little box with a working QR and Bar Codes!! And then he sent it to us from the other hemisphere of the world. It took more than 8 months to get here but it did, and god damn it it’s a thing of beauty. Satan bless your soul M Skot Adams! 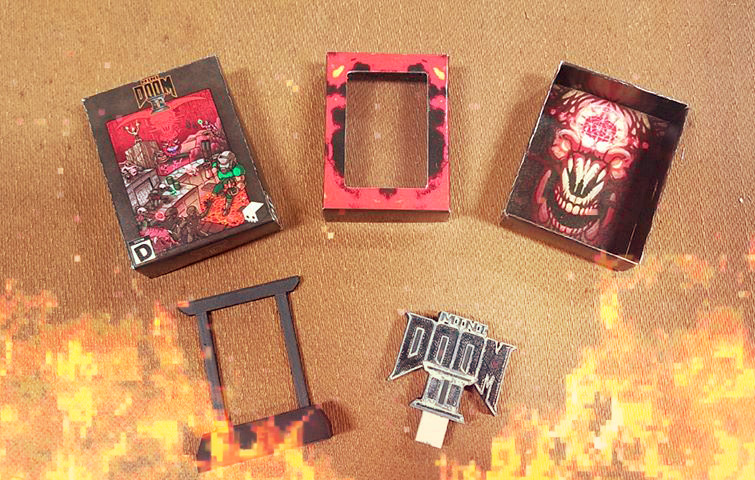 Another incredible human is also making a fighting game where classic characters fight each other using the mechanics from their respective games. Sort of  a smash brothers but 2D, a super cool idea! And he’s also working to get mini-doomguy in the game! Follow his game at

Then a student approached us and said his thesis work was a videogame. He asked me if it would be ok to use some sprites from the game to make his own and I told him “FUCK YES”. So I gave him all the graphics he needed. Sometime later he had made a miniDoom game in Python! He passed the exam with as he said “the highest possible mark”. Congratulations to you Axel Ribon, glad we could help!

So in short, there are amazing people all over the world.

So yeah we want to give back to the community, we always had the idea to release the assets for the game but never got around to it.

And now we finally are putting up a download section where you can download the sprites of miniDoom and create your own stuff! (now let’s see if we can finally make that damn Mac port…)

And finally thank you to everyone ever who commented, or gave a like, thumbs up, etc. Even for the harsh criticism (yes, that’s valuable too!) We appreciate every one of you, and THANK YOU FOR PLAYING!

3 thoughts on “MiniDoom 2: A lovable mess”