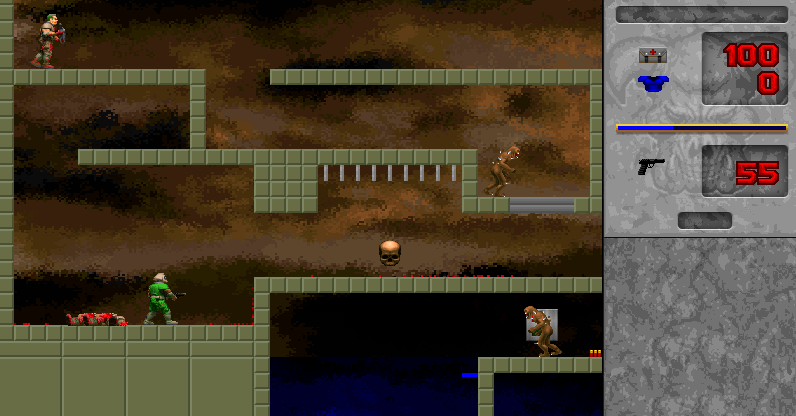 When we launched miniDoom1, people soon told us about another 2D doom game which has been around since years ago! I had to check it out, so I played it and here are some thoughts!

Some back story first, this game is REALLY OLD, it ran on DOS. It seems it was made at some point during the 90s by some fellows in Russia. Since then it has seen many improvements and compatibility fixes, it has an active community keeping the game alive. Now that’s dedication!

My goal here is not to compare Doom2D with MiniDoom. This game is a completely different beast, the gameplay is very different from MiniDoom. I’d say that Doom2D is actually a lot more faithful to the original Doom!

So let’s check it out:

First thing you’ll notice when playing is that friction is almost nonexistent, you slide everywhere which I never could get used to…

The enemies will not detect you unless you are in their line of sight or shoot them. Just like the original Doom. Touching them does not hurt you unless they are attacking, once again like the original, except they don’t block your way. Enemies can also get staggered which is really useful since there is no other way to dodge their attacks. Sliding through enemies and staggering them with punches turned out to be a good strategy early on (I called it the dance of death).

the dance of death

around level 5 a cyberdemon just falls on top of you!

Each level is one big maze-like screen, you have to collect keys to get to the exit as usual. But the game plays more like a puzzle platformer; it’s never a straight path to the exit. You have to try switches to find the next key and figure out the correct path. It can get frustrating when you get stuck because it’s not clear what the switches do. But hey, I remember the original Doom being very maze-like too.

there are many instant deaths. No problem tho, you can save anywhere

Overall the levels are not the best part of the game. Platforming feels clunky and slippery, and the puzzle aspect is not very fun (swimming and backtracking can get tedious).

The best part of the game in my opinion is that it has a strategy element. The camera is zoomed out, so you can see a lot of the level. You can also save and load mid game. This gives you the option to plan your fights ahead. Since the enemies won’t attack until you make your move, it felt like a sort of doom-chess, I really enjoyed this. I just wish there were more encounters to strategize and less “trying out every switch in the room”.

So give this old gem a try! It has and old school feel of Doom to it. And it also has Multiplayer!

And my deepest admiration to the team behind Doom2D, making this game 20 years ago! And for god damn DOS!!! it must have been hard as hell. And props to all the great doom community keeping this available for all to play. I just wish I found about this little gem sooner.