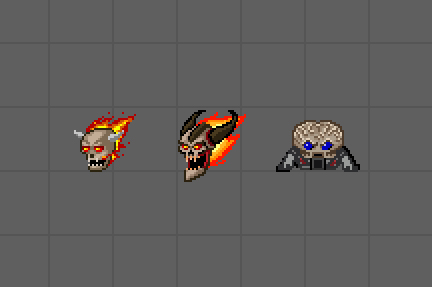 Let’s not forget about the lesser enemies. They might be small but they received big changes.

Let’s face it; lost souls in miniDoom1 were overpowered as fuck. They could charge into you then just continue to damage until you moved or somehow killed them while they were inside your hitbox. It was pretty bad (also in version 1.0 they used to do double damage).

So now the super needed change: Lost souls now bounce off you. Once they charge you or you run into them, lost souls will be pushed back. A small change but it makes a huge difference!

It’s a new brand of lost soul from D2016. The main difference is that contact with them will make the lost soul explode. The explosion is not too damaging but the pushback effect can be really dangerous, especially since they tend to hang around cliffs. Killing the lost soul will not produce an explosion, just some harmless sparks.

Well this is one enemy that we changed completely. I posted some sketches of this enemy last year and ever since I really liked the concept. I went for it because the alternative was just not different enough from the heavy-weapons-dude or mancubus. I thought this would be better for gameplay diversity. It crawls around walls and ceilings (like the Metroid guys) but it also shoots plasma at you if you cross its line of sight.

This is the only incarnation of the arachnotron in the game, but if we ever release more content for the game, I would like to do a proper sized one based on the Doom64 arachnotron.

Got a soft spot for this fellas, still gotta murder them

1 thought on “The smaller things”