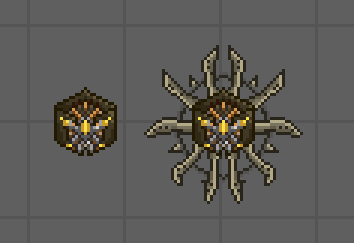 Screaming back from Doom3 comes: the Soul Cube!

The Soul Cube uses the same button as the grenades. It essentially IS a grenade. But you don’t always have it available. It charges up with kills. Once you kill enough enemies, your next grenade will become the Soul Cube.

Grenades in miniDoom are meant to help you with enemies not directly in front of you. But they just deal medium damage. They will kill basic enemies on impact, but the blast is small and not very damaging. The Soul Cube however will deal heavy damage!

Much like its Doom3 counterpart, the soul cube is a homing projectile, once it reaches an enemy, it will deploy its blades and slice anything near for a couple of seconds.

It will then return to you and restore all of your types of ammunition, based on how much damage it dealt and if it killed any enemies. Unlike Doom3, it will not heal you, it is meant to help you with ammo management.

The Soul Cube deals constant damage in an area. This means that’s its deadly for slow enemies such as Cacodemons but not that great for Pinkies.

The Soul Cube is a useful tool that will hunt down difficult enemies and restore your ammo, use it as often as you can!