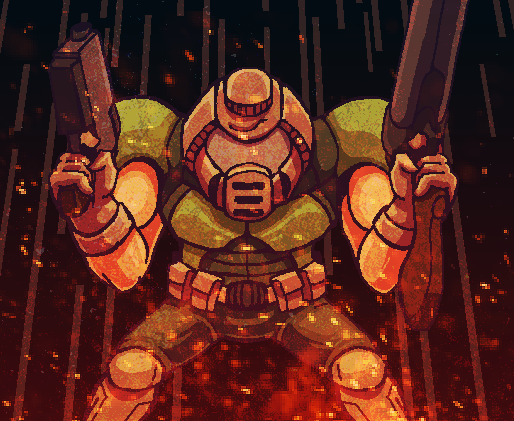 Last week we held the first two official closed beta tests. We had many people play before, but only casually in conventions or at events and in those cases people rarely got past the second level.

Last week on Monday and Sunday we gathered some actual gamers and brought the whole complete game for them to play.

After 3 hours of solid gaming the tester was watching the end cut scene and asked “when is the sequel?” but just at that moment, the marine arrived in hell and I had to tell him that he had finished only the first half of the game. And that that the levels in the second half are way longer.

It seems the game is way longer than I expected, trial and error means that it takes a while for players to finish a level. But I’m relieved to say that with the amount of checkpoints, dying didn’t feel like a terrible punishment but a chance to try again. I’d say it clocks in at 6+ hours of gameplay depending on how good you are, and this is not taking collecting the upgrades or secrets into account.

The difficulty was a scary factor for me, since the game is hard and I thought it might be too difficult and become frustrating. Players played in normal difficulty; It’s the only one right now that is balanced. I’ve seen people struggle, it’s not an easy game. When I asked if I should lower the difficulty everyone said that it’s fine. “It’s just that you can’t finish it without learning how to play” said one tester, and that sounded alright. Plus you can always restart a level in easy.

Overall the testing went really well. Everyone was very impressed with the soundtrack. Hearing that people enjoyed playing and the positive feedback was very motivating. We are all really tired from the hours we put in the game the last two months, it was insane. But its all coming to an end.

Now we are finishing up the options menus, the credits, the scores, the secrets, the difficulties and the trailer. Only the details now.

We hope to see you very soon.