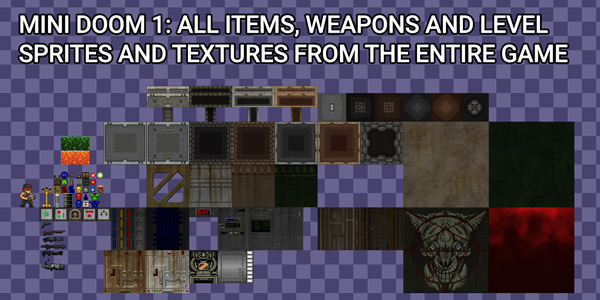 When we developed our first game MiniDoom 1 last year, I used the occasion to learn how to make pixel art since I had been drawing traditional and digital art for quite a long time but never actually made pixel art and always thought it looked beautiful.

After many weeks of working I realized how amazingly hard it is to make it look half decent. It’s easy to grab a couple pixels, put them together and call it a sprite, but anything worth looking at will certainly take quite a bit of work.

But putting artistic prowess aside, the amount of sprites that are required for any game is what surprised me the most.

After the aforementioned weeks of hard work, I thought I had produced millions and millions of sprites yet the final tile set is not that impressive…

Of course since I was a complete noob, making that very simplistic and humble group of pixels seemed like an impossible task.

One year later, that tiny tile set look comically small compared to all the assets required for the new iteration of the game.

Here is the tile set for the second level alone, it’s practically the same size as the entire first game!

Now that I have a bit more practice (a full year of it) the process has become a bit faster, still really hard but it doesn’t take so long.

At this point the graphics of the game are about 70% complete and every day seems like the to-do list grows a bit bigger since every time a level is implemented and tested brings lots of new ideas about decorations, new colors of simply completely redesigning a level (which already happened once).

In any case, here is a comparison between the assets for the complete first game (not counting enemies and the hero), compared to the pixel art made for ONLY half the levels for the new one.

The enemy list has undergone a similar change, we’ve upgraded from 6 enemies in the first game to 24 in the new one.

And each sprite has had its own quite large upgrade in frames and actions.

In general, the lesson I took from this experiences is that anything you might plan will eventually take at least 80 times more time and resources than expected!