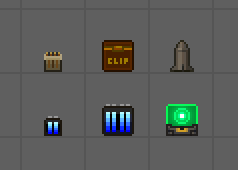 Hello, we wanted to talk about how ammo works on MiniDoom.

There are 10 weapons in MiniDoom2. 6 from the first game, we have already shown 2 new weapons, (not counting grenades and the Soulcube) and there are still 2 we haven’t shown. And we won’t do so just yet. Sorry about that. 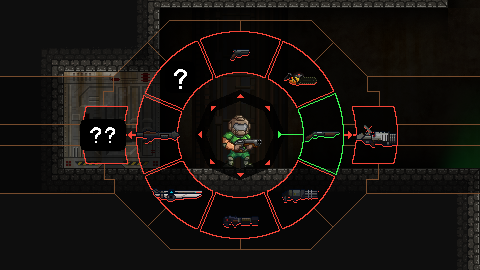 About them I’ll just say that one uses enemy kills as ammo. And one is just pure death.

So we have expanded the types of ammo in the game. On MiniDoom 1 you only had bullets, rockets and energy. We wanted to keep the game simple! But this is why the BFG was weak, it had to share ammo with the plasma riffle.

On Minidoom2 the BFG will have its own kind of ammo, much harder to find. So it will be much more powerful. It will also share ammo with the ???????.

There will also be an additional resource acquired through kills: enemy souls. This will power the Soul Cube which can restore your other types of ammo. And the ???? ???? which can just use this resource as ammo. Both are meant to give options on ammo management. 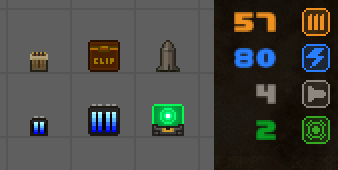 yellow for bullets, blue for energy, grey for rockets, green for BFG

The other types of ammo we plan to leave unchanged. Bullets for Shotgun and Chaingun. Energy for Plasma and Gauss. Rockets for Grenades and Rocket Launcher.

Some people found it jarring that the shotgun and chaingun share the same ammo.

We think that that’s okay because the two guns use the ammo differently.

The Shotgun gives pain up front, it is slow but good for saving ammo. Since you only shoot every so often, you can dodge and reposition yourself in the down-time. 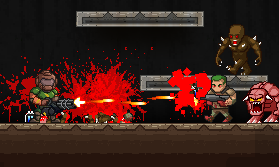 The Chaingun deals insane Damage (highest in the game) and burns ammo quickly. But to deliver this damage, you have to remain facing your opponent and shooting constantly. This means you can’t run away or dodge.

Both weapons are good in different situations, we didn’t want the situation to be “out of bullets, switch gun”.

3 thoughts on “Ammo Types and Weapons”