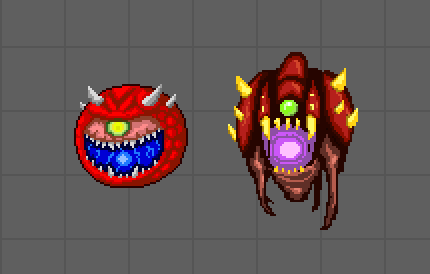 We love the cacodemon. It is probably our favorite enemy… it’s just so charming!

So cacodemons in MiniDoom2 are a bit different. You will find them floating around from the second level onwards. This means that they are not as powerful as they used to be. 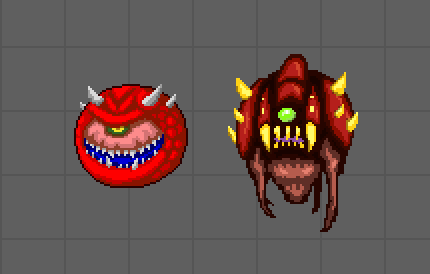 In Minidoom1 cacodemons where high level enemies that were really tough to kill.

In Minidoom2 they still have the role of a floating sniper, but they have less HP. The other stats are also a bit reduced: damage and projectile speed. Their shots still explode in a small splash area. This is in order for the cacodemon to become a more common enemy and use it often in the level layouts. So expect to see lots of these smiling guys.

We didn’t want to lose the impact of a powerful cacodemon so made a variation based on the cacodemon from Doom 2016. Although this demon has a different role, it is a short range chaser.

It is also much tougher and faster. Once these cacodemons get close to you they will unleash a torrent of fire that deals heavy damage and can push you back.

Your best bet against these bastards is to exploit their short range, and weaken or kill them before they can get near you.

2 thoughts on “The Cacodemons”