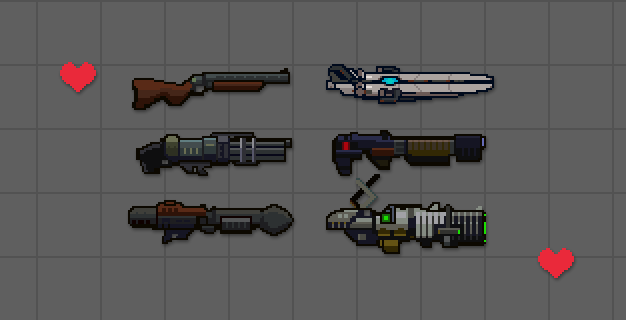 After A LOT of testing and arguing we are finally happy with the weapon selection in minidoom2. It was really hard to fit the things we wanted into the game, and make it fun and intuitive to play. Here’s how the process went: 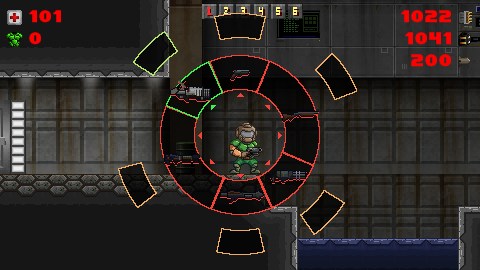 Stage 1: We are making minidoom2!!! I want to make MORE WEAPONS

When we started this I wanted more guns. We had 6 and I wanted to double that. I figured that each weapon would have an alternate weapon, and that would be awesome. Like chainsaw was the alt for the pistol, and the SUPER SHOTGUN for the shotgun. It worked in theory.

Turns out that wheel controls like crap, not intuitive at all. Trying to select a diagonal twice to switch a weapon was just all kinds of wrong… 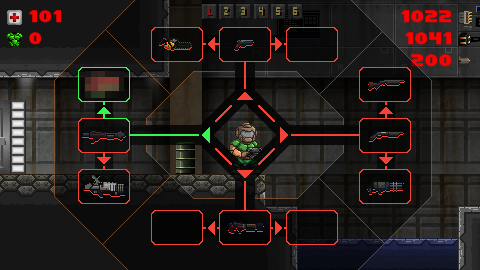 Stage 2: Denial and the weapon matrix-grid-tron

So I analyzed why it didn’t work. Seems it’s only intuitive to use 4 directions in a keyboard. So then I made another system based on 4 directions, arranging bullet weapons on the right, energy on the bottom, explosive left and no-ammo top. So you press a direction to select a basic weapon then another one to select another less basic weapon. It worked in theory, and it could hold all 12 guns.

Unsurprisingly it worked like crap. In keyboards it was ok-ish. But in gamepad it didn’t work AT ALL. People testing it were just confused at all that huge grid of weapons and how to select them… The conclusion was unescapable… painful CUTS were needed. 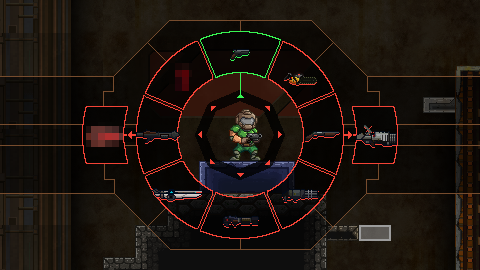 This is the hard part. As a developer there are many things you want to put in the game. And much of it will not work and clutter the gameplay. 4 directions plus 4 diagonals were easy to use and understand. So we had to reduce the amount of guns to 8. (good bye super shotgun…)

But then I found a middle point. By making the ultimate weapons (BFG) stronger and more limited with their own ammo, it also made sense for them to be harder to select. So you wouldn’t pick them by accident. So then I added two additional slots, left and right had to be inputted twice to select them. It wasn’t comfortable, and it worked perfectly!

So you could say that Minidoom2 has 8 core weapons and 2 more for rare occasions. But you’d be WRONG!! 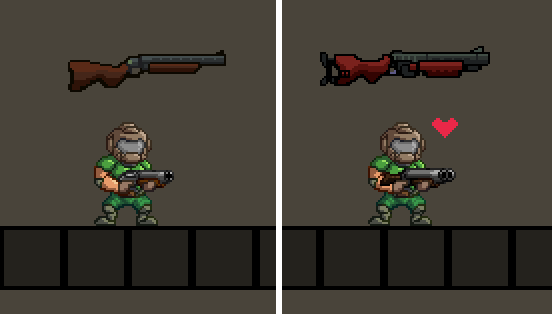 This is all taking more time than expected, but we are learning to deliver a good experience in a game. See you soon space marines