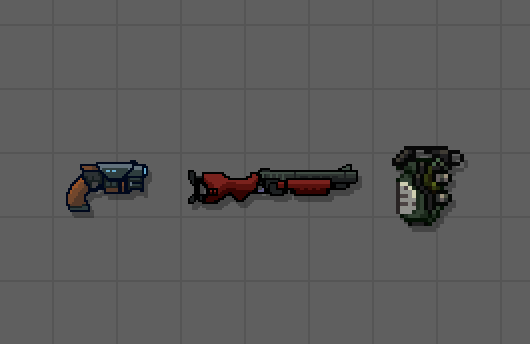 Some of the starting weapons in MiniDoom2 can be upgraded to a new weapon if you find the corresponding powerup. It’s not just cool, it was necessary.

I was halfway through designing the levels, and there is a difficulty spike when entering the hell levels. There are new enemies and they are tougher, so I planned to introduce the super shot-gun there and increase the player’s damage output as well.

The design philosophy here is that no single enemy is supposed to be too hard to kill (except for bosses of course). Enemies are meant to be killed in large quantities, with the challenge not being in taking them down but in not receiving too much damage in the process. I think I will do another post detailing more about where we want to focus the challenge in MiniDoom2 and why I opted for including small ammo and stat collectible upgrades.

Anyway I noticed that I didn’t use grenades, the shotgun or the pistol after a while. Because these weapons were the first in the game I realized that they did have a lower power level, and I couldn’t change that without making the game easier. BUT I WANTED ALL WEAPONS TO BE EQUAL. So a solution was to include an upgrade for the weapon later in the game to raise their power to that of the other guns.

The necessary double-barreled partner you need to go into hell. When you get this upgrade, the shotgun has become a lot mostly outclassed by the gauss canon and minigun. But then it gets elevated to god-tier. At the cost of a higher ammo consumption and reload time, a well-placed super-shotgun blast should dispose of most of hell’s minions in one shot. You’ll fall in love with the shotgun all over again.

Double the barrels, double the fun

Grenades are very useful in the start of the game, but slowly become irrelevant. With plasma and gauss as better alternatives to aiming and rockets as a more devastating use of your ammo, halfway into the game grenades seemed to have been forgotten.

The fragmentation upgrade increased the damage area and makes each grenade fire a blast of 16 shrapnel fragments in a short radius. This weapon is very powerful against big enemies since they tend to catch much more of the shrapnel. The grenades become really useful against single powerful enemies rather than area weapons since there are better options for that (like the BFG), it’s a really nice switch in utility. And the shrapnel can bounce of walls too!

Those fat cacos are a good target

Its Doom2016’s Energy-Matter-Gel Pistol. This upgrade increases the size of the pistol projectiles a lot, making it easier to hit small enemies like lost souls. The damage is also increased enough to one-shot them. However you CAN NOT charge up the damage of the shot like in Doom2016, this mechanic would promote passive playing and reward waiting. I don’t think this would be a good addition to MiniDoom. It may have worked in Doom because they have other mechanics that encourage engaging enemies (like glory kills).

So right now the EMG is just a damage upgrade, I’m still thinking if it should add some extra utility to the pistol. Tell me what you guys think.