The BFG returns and is now as powerful as it should have been the first time. It is a massive area of effect projectile weapon that can deal critical damage at close range from the blast and low damage at long range from the blast. Its usage is very limited, but it can clear the screen of enemies.

How it used to work in MiniDOOM1

The BFG used energy as ammo, also in that game you could accumulate a lot energy cells. So either I made the BFG really powerful and eat up a huge chunk of you energy, or made it less strong and allow the player to use it more. I went for the latter approach, because I wanted the player to have plasma ammo if needed. 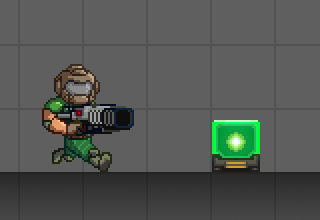 I guess it was the right decision because the BFG wasn’t precise at all, often bullets would just miss theyr target and if they were too expensive it would be frustrating. The downside was that when you hit, the enemies wouldn’t die, and the weapon felt weak.

The damage was also kind of random. The damage was proportional to the distance but was not regulated to be useful with enemy health amounts. That meant that most times the damage would be just a bit short to kill an enemy. Like a pinky having 90 life and BFG deals 87 because pinky was just a bit far. This kind of damage is not useful, it just left all enemies weakened and made the weapon feel wrong.

What can you kill with one shot? A lot

How it works in MiniDOOM2

Main difference is that BFG now has its own ammo, this is how the ammo works:

Whenever you spawn (enter a level or respawn) you have enough BFG ammo for one shot. You can also accumulate enough BFG ammo for two shots, but BFG ammo is very hard to come by, it is usually hidden. So the BFG is your trump card, you always spawn with one, and decide when its best to use it.

You can also increase your BFG ammo (starting and max) later in the game. To increase fun all enemies have a REALLY SMALL chance of dropping BFG ammo when killed!!

The AoE is most of the screen

In the accuracy department BFG projectile now travels a distance, and then it homes into the nearest enemy, much like the plasma but slower and more accurate. The projectile also has a huge hit box for enemies, and a small one for terrain. If the BFG doesn’t hit anything in its short life, it’ll explode blasting anything nearby. Much more reliable than the older version.

In the damage department BFG is devastating. The projectile itself deals damage and a direct hit with it will kill almost anything except for the toughest enemies (Hellknight will die but Archville can survive). Then it has 5 area damage zones according to distance to the blast. 1st distance has enough damage to kill mancubi or cacodemons, 2d has enough to kill armored pinkys, 3rd can kill hellrazers or heavy weapons-dudes, 4th imps, and 5th zombiemen.

They were asking for it… clumping up like that

Use your BFG wisely, but don’t overthink it. You always have one available. So don’t forget that when things get tough you always have the nuclear option.