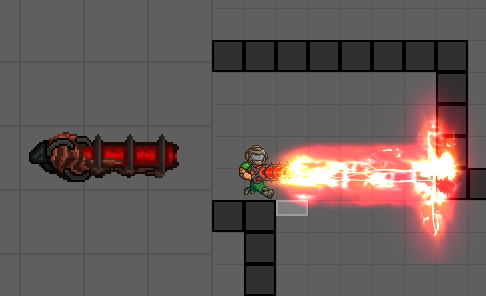 You saw it coming. The last weapon is Doom64’s Unmaker! The Unmaker is a devastating precision-weapon that can deals massive damage in straight lines. It is perfect for taking out priority targets, even when they are in a crowd.

This weapon also has a long history in its development. As soon as we started planning the new weapons, we knew we wanted to implement the unmaker somehow.

If you played Doom64 you know the Unmaker is a rapid fire laser that pierces through enemies and can have a small spread.

Thinking about translating this into 2D I immediately thought about a hitscan(instant hit) laser gun, much like the metal slug laser, except it would go through enemies.

Problem is, It was too good. The weapon was just too convenient, it was a super powered version of the minigun or plasma. It didn’t really do anything different, it just did it better.

So then I tried to balance that prototype, low damage didn’t feel like an ultimate weapon at all. High ammo consumption seemed like the best way, so you could only sustain the beam for a few precious seconds. But that also felt wrong somehow… It made the minigun obsolete and it also didn’t feel ULTIMATE enough…

Then I went for a more BFG approach: rare ammo, small charge time and a high payoff. And after balancing the weapon it felt right, one of my favorites.

It felt like an ultimate weapon. Rather than shooting it for a few seconds, it builds up for a second and then it shoots a massive blast in the direction you are aiming. It’s harder to master, but the payoff is also more satisfying.

Getting the timing right is key

The Unmaker fires a huge laser (as tall as you are) that deals massive damage to everything in front of you instantly. Afterwards if anything survives the initial blast it will also deal additional heavy damage to the first enemy in front of you. This means the Unmaker is great for killing tough priority targets like archviles, summoners or chosen hellspawn even when they are surrounded by lesser demons.

If the additional damage is triggered, a visual effect is displayed over the enemy

The Unmaker doesn’t have the massive radius of effect from the BFG but it shoots faster and it also consumes HALF THE AMMO. So you can be a lot more liberal with your Unmaker shots.

Annihilate everything in front of you or deal massive damage to one target. The Unmaker is the perfect weapon for a platform game, delivering instant death in straight lines.