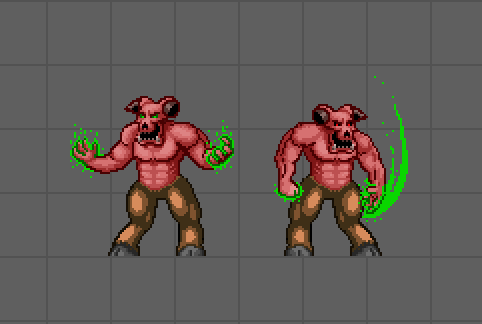 The barons are back! And this time they are not a boss, but they aren’t just any regular enemy either. Barons are really strong; they have a large health pool and a lot of damage. They also have a new kit of abilities, with a powerful melee slash, a large homing fireball and of course TELEPORTING!

First of all the barons received a visual overhaul too! They have new sprites and animation frames, new effects for their fireballs and melee attack.

The baron of hell is all about keeping the player moving. Previously barons would just try to teleport on top of you which created fireballs, then they would shoot MORE fireballs at you. It was ok-ish to keep you running, but the player could just stay there and tank the projectiles. 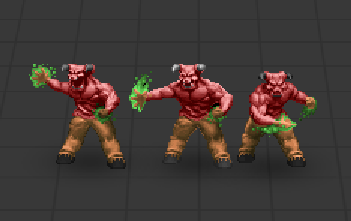 This time we are taking a different approach. The baron’s fireballs are significantly slower and will only chase you for a short while, they deal good damage though. The barons strength now lies in its melee attacks, because of that its movement speed is also slightly increased.

When the baron teleports near you he won’t spawn fireballs, but if you stay near he will strike at you with a fiery slash that deals heavy damage and has quite a knockback.

They are less dangerous at a distance

To deal with a baron of hell keep moving and attack when the baron teleports and is vulnerable. Just keep moving but be careful where you run because they will never stop trying to teleport and get you cornered.

I said don’t get cornered!

If you played minidoom1 and see a baron of hell with the chosen fire crown, you’ll probably get some flashbacks with the amount of health they can have.

Barons can’t jump, so luring them to a fall is also a good strat

Barons of hell will be teleporting on your face pretty soon. See you then space marines.

3 thoughts on “Baron of Hell”