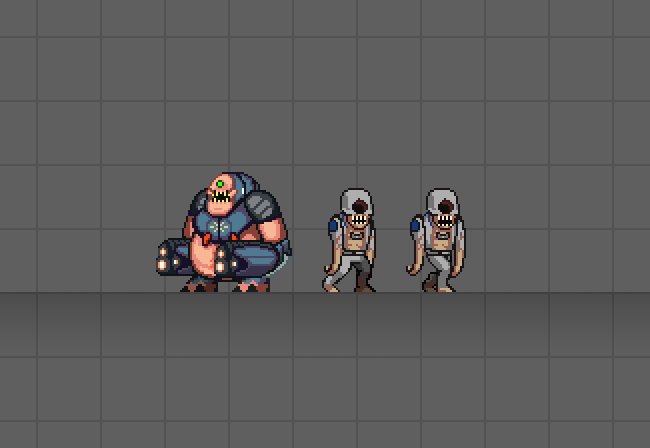 With the last post about the summoner we have covered all of the enemies in the game, except for a few special cases. I’ll clump two of these extra enemies here.

they don’t deal damage for a second when coming out

These enemies are kind of a level hazard, since they appear only on a single level of the game and only on very specific areas.

They are a very simple monster, just a slow melee attacker. But in certain areas of the level they spawn endlessly from the ground, every time you kill one, another will raise somewhere near. They are a pretty fun obstacle to overcome. Every level in the game has its own unique mechanic like these zombie-like guys.

don’t step on the puddle

These variation on the mancubus used to be just the same but with more hit points. After reding some comments in the blog, I decided to give a shot at making it a more unique enemy.

So I made an acid version of the shots with some simple particles, the shots are also a bit faster but smaller. And now that a cyber mancubus dies it creates a pool of acid for a few seconds. Also there is a new effect to distinguish when  the player is touching acid or lava.

About the D3 mancubus, hes probably gonna work like the cyber-mancubus but stronger. Anyway it just appears in a single stage.

10 thoughts on “Other Enemies”